Last week we had to call another ambulance.

I had an episode of reflux where some feed ended up in my lungs and up my nose. It was scary; I felt like I couldn’t breathe but my Oxygen sats. were the best they’ve been over the last few months. My nose was running and the saliva problem got worse as my body reacted to the feed. My cough wasn’t strong enough to clear it so we used my cough assist and suction machine. Unfortunately my gag reflex is super sensitive (another joy of the MND) – so Julia was looking in my mouth to see the stuff that needed suction and quickly stepped aside as I wretched. It was hilarious! 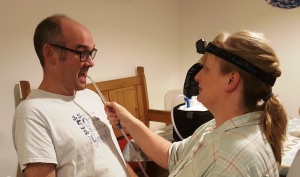 After 20 minutes I was worn out so we agreed to call an ambulance.

4 minutes later two paramedics turned up in a car (first responders) and a while later two more arrived in an ambulance. Fortunately, in the meantime we had got the chest cleared.  Julia said it was “the green uniform effect” and suggested I get a cardboard cut-out of a paramedic.

I didn’t have to go to A&E up at the John Radcliffe in Oxford; they managed to get me an appointment in our local hospital for a chest X-ray to show it had all cleared. The doctor gave me a 3 day course of antibiotics just to be safe.

They are so nice down at EMU (Emergency Multidisciplinary Unit) at Abingdon Hospital – Julia even got a cup NHS tea. 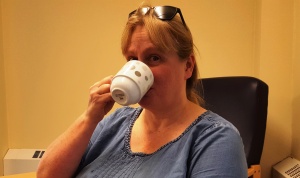 A couple of days later the same thing happened but we managed to clear it without the green uniform effect.

Julia emailed the surgery and the GP got back within the hour, even though it was his day off! He added Dom Pérignon (Domperidone), the true champagne breakfast – to speed up the transit of food through my stomach.  Now I am on smaller feeds 6 times a day starting at 7.30am  Doesn’t she know I am a teenager !?! 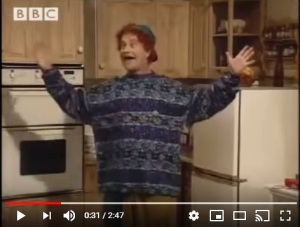 So now we are taking the suction machine and the cough assist wherever we go. I don’t know where I would be without Julia; probably in hospital. I love her more than ever…